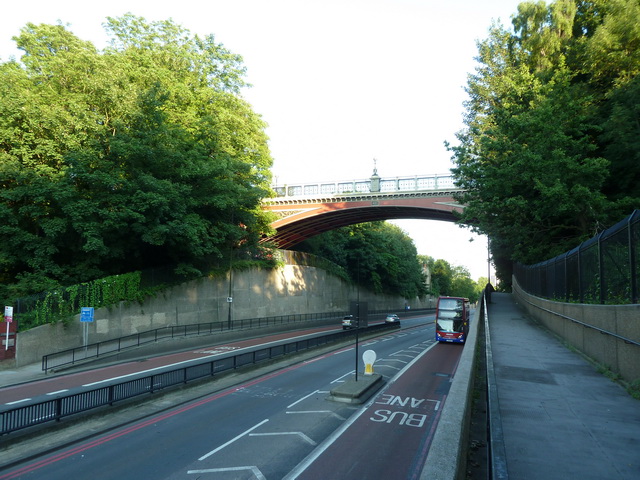 Archway, at the northern fringes of Islington, has a rich history that encompasses developments in public health, transport and welfare. Archway has also long been synonymous with Islington’s Irish community who’ve added their labour and culture to this part of London.

Archway takes its name from the original bridge that takes Hornsey Lane from Highgate to Crouch End which provides the area’s northern border.  It developed as a suburb in the early 19th century and now borders the borough of Haringey to the north and Camden, at Dartmouth Park, to the west. In Islington, Archway’s borders are Upper Holloway to the east and Tufnell Park to the south.

Archway Bridge The original brick bridge from which the area takes its name opened in 1813 and was designed by John Nash to resemble a Roman aqueduct, with three low arches above a much grander one. It spans the Archway Road, which also opened in 1813 as a toll road, a year after a proposed tunnel through Highgate Hill collapsed. The cast-iron arch we see today replaced Nash’s bridge in 1897 and provides a stunning view towards St Pancras.

St Joseph’s Roman Catholic Church, Highgate Hill St Joseph’s is instantly recognisable by its green dome on Highgate Hill. Holy Joe’s, as locals call it, was the second church built on this site. The Passionist Fathers, a Catholic religious order founded by St. Paul of the Cross in 18th-century Italy, bought the site of a disused pub in secret at auction in 1858, such was the hostility to Roman Catholics, but by 1889 this magnificent structure was open to a rapidly growing, largely Irish, congregation. For more see https://www.stjosephshighgate.org.uk/about-us/our-history/

Navigator Square and the Irish in Archway -Archway became home for thousands of Irish people after World War II – the ‘nurses and navvies’ generation (‘navvy’ is an abbreviation for ‘navigator’, the builders of London’s canals in the early 19th century). At times 80% of the nurses at the Whittington hospital were from Ireland and Irish labourers helped rebuild the bomb-scarred capital, as well as the new Victoria Line. The Gresham dancehall on Holloway Road (now a Sainsbury’s) and the Archway Tavern were favourite meeting points and Holy Joe’s and St Gabriel’s off Holloway Road saw many weddings and christenings among the Irish community.  This heritage was recognised in the naming of  the newly pedestrianised Navigator Square in 2017. For more see https://islingtonlife.london/discover-islington/local-history/the-irish-in-islington/

Archway Underground Station -The original Leslie Green designed station opened in 1907, under the name Highgate faced in Green’s standard ox-blood glazed brick. In June 1939 he façade was redesigned in an art deco style by Charles Holden, who designed many of the stations across the city and the station was renamed Archway (Highgate). The station was renamed Highgate (Archway) in 1941 before becoming just Archway in December 1947 with the Highgate name being reassigned to the new station constructed beneath the London and North Eastern Railway (LNER) high-level station of the same name. In the 1970s, the station was redesigned for a second time in its present day concrete form, alongside the iconic and brutalist Archway Tower.

Methodist Central Hall – The imposing building on Navigator Square was commissioned in 1934 by a leading light in both the Methodist Church and the film industry – J Arthur Rank. Rank first started showing religious films at the Sunday School he taught at so it’s perhaps no surprise that his Archway church resembled a cinema, with a 1,000 seat auditorium and big screen, to attract working-class worshipers into an environment a lot less stuffy than many churches. Part of the building is still used as a church; the rest is under regular talk of redevelopment.

Whittington Hospital – In medieval times, there was a leprosy hospital near to Highgate Hill and in 1848 a smallpox and vaccination hospital was built on the site, the frontage of which can still be seen today. Becoming a NHS hospital in the late 1940s, the Whittington hospital site comprises three former workhouse infirmaries established in the late 19th century by the Islington, Holborn and St Pancras Workhouse Unions. Florence Nightingale advised on the architecture of the St Pancras building on Dartmouth Park Hill where Edith Cavell was a night sister in 1901. For more visit the Workhouses and the Lost Hospitals of London sites.

Workhouses in Archway – New legislation in 1834 required local areas to establish ‘unions’ to provide workhouses for people who could not support themselves. The regime was punitive and deterrent – families were separated and put to work inside prison-like buildings. Islington Union opened a large workhouse on St John’s Way in 1869. The institution continued as London County Council housing after the abolition of unions in 1930, but was finally demolished in 1972, apart from the central board room. A park and new housing replaced it.

The housing development at Cornwallis Square also replaced a former workhouse, originally established by the West London Union, but taken over by Islington Union in 1882. During World War I, this workhouse became an internment camp for 750 ‘alien civilians’ – German, Austrian and Hungarian men who had been living in London, often for decades. For more see the Workhouses website

St Pelagia’s Home for Destitute Girls – A reminder of a grim, and often forgotten, history can be found in Bickerton Road. Bickerton House, currently studios and offices, was built in 1889 as St Pelagia’s Home for Destitute Girls. This was run by the Roman Catholic Sisters of the Sacred Hearts of Jesus and Mary and provided accommodation to unmarried mothers and their first-born child. It operated a similar regime to the infamous Magdalene Laundries as depicted in the 2013 film Philomena.

Mothers were allowed to enter when their baby was a fortnight old and were expected to remain for 12 months. During that time they had to earn their keep by working in the home’s laundry or doing needlework. They were not allowed to speak while working and only permitted to see their child for one hour per day. At the end of this time they were forced to give up their child for adoption. Many of the mothers were subsequently given new identities making it almost impossible for children to trace them later in life. In the 1930s the home moved to Highgate West Hill and was finally closed in the 1970s. Only this building remains as a reminder.

Maiden Lane Reservoir = A spectacular and little-known panoramic view of London is hidden away in Dartmouth Park. This small park on Dartmouth Park Hill stands on the area of land surrounding the Maiden Lane reservoir. The covered reservoir was built in 1855 by the New River Company and connected to its pumping station at Stoke Newington. It’s still operational and today managed by Thames Water. At the time it was built today’s Dartmouth Park Hill, Brecknock Road and York Way were all part of an ancient by-way known as Maiden Lane running from Highgate to King’s Cross, hence the name of the reservoir. The road was divided and renamed into the current three sections in the 1870s so calling the park ‘Maiden Lane Park’ when it was opened to the public in 1972 would have made little sense.

Dick Whittington – The Whittington Stone on Highgate Hill, just past a pub of the same name, is said to mark the spot where Dick Whittington turned again. In despair the poor boy left London to head off back home to Gloucestershire after failing to make his fortune but was summoned back by the sound of Bow Bells (St Mary-le-Bow in Cheapside) telling him he would become “thrice mayor of London”. On his return he discovered that his cat had made him a fortune, married his master’s daughter and became a successful merchant and Mayor.

The pantomime story that most of us are familiar with is based on the life of Richard Whittington, born in Pauntley, Gloucestershire around 1354. He was the third son of a wealthy family and as he would not inherit the family fortune he was sent to London to be apprenticed to a mercer (merchant). After completing his apprenticeship he became a member, and was also the Master, of the Mercers Company, the foremost City of London Livery Company, and was a rich and successful merchant and money-lender. He was, in fact, Mayor of London four times; he was initially appointed to the role as the incumbent died in office and was then elected on three subsequent occasions. He married wealthy Alice Fitzwarren but they had no children.

During his lifetime he devoted much of his money to improvements in the City and when he died left his wealth to the Mercers Company who established a charity in his name which still exists today. In 1822 the Mercers built the Whittington Almshouses at the bottom of Archway Road, sadly demolished when the road was widened in the 1960s but the adjacent street is named after his home town, Pauntley. The stone on Highgate Hill was erected in 1821 and the cat sculpture was added in 1964. Whether Dick Whittington actually had a cat is a matter of debate but there is also a cat sculpture over the main entrance of the hospital and a topiary cat at the entrance to Whittington Park on Holloway Road. Throughout the Archway area you see references to Whittington, Pauntley and Fitzwarren on streets and buildings.

Peter Sellers – The actor and comedian lived at the Archway end of Muswell Hill Road immediately before World War II and attended the local St Aloysius’ College. Later in life Sellers was involved in an incident at Archway Bridge where a man was about to jump off and end their life. Police arrived and started talking the man down. During the course of the negotiations, a Rolls Royce pulled up and Peter Sellers jumped out with Wilfrid Hyde White, his co-actor in ‘Two Way Stretch’ and ‘Up the Creek’, and Sellers also started trying to coax the man down. The man told Peter Sellers to get lost and a kerfuffle ensued, during which a policeman became handcuffed to the man. Peter Sellers then uttered the immortal quip “If he jumps you really will be the Long Arm of the Law!”

Bridget Dowling – Bridget Dowling, Adolf Hitler’s infamous sister-in-law, lived near the present Highgate tube station.  Bridget, estranged from Hitler’s brother Alois, raised her son alone with no support from her husband from whom she was eventually divorced. Between 1930 and 1939, she set up a home in 26 Priory Gardens, and took in lodgers to make ends meet.

Ray & Dave Davies – Ray and Davies, founders of rock band, The Kinks, were born and raised in nearby Muswell Hill. However, their Archway connections were strong enough that the cover photo of the Kinks’ album, Muswell Hillbillies, was taken in the bar of the Archway Tavern. While the Clissold Arms on Fortis Green was their local. Archway provided a more authentically Victorian working class boozer.

Rod Stewart  = The singer was born above his parents’ newsagent at 507 Archway Road on 10 January 1945. The youngest of five children, his father was a builder before buying a newsagent further up the Archway Road when Rod was in his teens; the family lived over the shop and Stewart often worked as a paper delivery boy.