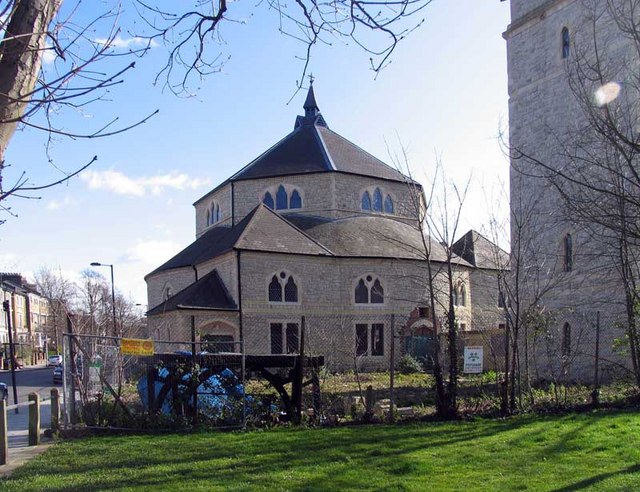 Squeezed tightly into the corner where Carleton Road meets Tufnell Park Road is the unusual building shown above. Known as The Rock Tower, it has a large circular central section, with attached structures of various shapes and sizes, and a separate bell tower – now linked to the building by a modern extension.

The Rock Tower has been used for various purposes since it was completed in 1866, but nothing in its history is quite as unusual as the circumstances which led to its construction.

The story begins in the 1850s when Holloway was growing rapidly. Villas and terraces already lined Camden Road and residential developments were about to cover the fields on either side of Caledonian Road.  To serve the spiritual needs of the incoming residents, the Church of England set up a new Anglican parish, St Luke’s Holloway, and built a new parish church, St Luke’s, on the corner of what is now Hilmarton Road and Penn Road.

St Luke’s (shown above) opened in 1857 but was soon immersed in a scandal: the Rev Henry Hampton, who had been acting as its vicar, was dismissed from his post by the Bishop of London following allegations of financial misconduct. The Bishop’s decision didn’t go down well with members of Hampton’s congregation. Rather than accept a new vicar they decided to follow Hampton out of St Luke’s – and, as there wasn’t a nearby church for them to go to, they decided to build one. They held a collection, raised £700, hired an architect, George Truefit, and. within 6 weeks of approving the plans they had a new church: ‘St George’s Temporary Church’.

St George’s was built of wood but it was on a grand scale: it had a circular nave (seating 900 and 84 feet high at its centre); 5 entrances; a vestry; a bell turret; and ‘a good organ’. Hampton officiated at its first service in 1858, only a year after the completion of St Luke’s.

The new church appears on this map, which also shows St Luke’s. St George’s is the ‘Temporary Church’ standing alone in the fields between Holloway Prison (‘City Prison’) and the (unnamed) Holloway Road in the top right. (‘Park Road’ is now ‘Parkhurst Road.’) St Luke’s is in the fields to the south of Penn Road.

Despite having defied the church authorities, Hampton and his followers still considered themselves to be Anglicans and they applied for St George’s Temporary Church to be recognised as an Anglican church with Hampton as its vicar. Perhaps surprisingly, the Bishop of London was prepared to consider the request, but only once he had fully investigated the allegations that had led to Hampton’s dismissal from St Luke’s. The investigation revealed that Hampton had indeed ‘borrowed’ a substantial amount of money from the St Luke’s building fund, and although Hampton belatedly repaid the money (apparently with help from some of his loyal “church ladies”), that wasn’t enough for the Bishop. He was prepared to welcome St George’s Temporary Church into the Anglican community, but he wanted Hampton moved out of his diocese. Hampton could remain an Anglican clergyman – the Bishop offered to arrange a swap with an Anglican vicar elsewhere in England – but he couldn’t be vicar of St George’s Temporary Church or of any other Anglican Church in Islington.

Then, at some point in the next 3 years, everything changed. Hampton’s congregation remained as determined as ever, but Hampton seems to have regretted his defiance. Maybe he fell out with the Free Church of England or maybe he just longed to be accepted back into the Anglican priesthood, but, for whatever reason, in 1862 he accepted the deal that the Bishop of London had offered him three years before: he agreed to leave Islington and to swap roles with the vicar of St John’s, Wolverhampton.

At that point Hampton’s Holloway congregation accepted the inevitable. With the Rev Edward Pizey (the former vicar of the Wolverhampton church) in charge, St George’s Temporary Church left the Free Church of England and returned to the mainstream Anglican Church. When the new stone-built St George’s duly opened in 1866 it was as a ‘normal’ Anglican church and, as the population of Holloway had increased dramatically, it was given its own parish and became St George’s Tufnell Park.

It is this stone-built, second St George’s that is the building now known as The Rock Tower. Like the Temporary Church which it replaced, it was designed by the George Truefit, his inspiration apparently being the 5th century Byzantine church of St George in Salonika – shown here.

We don’t know what happened to the Temporary Church. It seems to have disappeared soon after completion of the new church: three years later, in 1869, there is no trace of it on a detailed Ordnance Survey map. We also don’t know what it looked like as no pictures of it have survived but it seems reasonable to assume from its description that it also drew its inspiration from St George’s Salonika.

St George’s Tufnell Park continued in use as an Anglican church until the Second World War when bomb damage forced its closure. Rather than repair it, the Church of England built a third St George’s round the corner in Crayford Road and sold the building. The old St George’s then spent 20 years as a Shakespearean theatre until, after a further period of disuse, it was acquired and restored by its current occupants, a church called The House on the Rock – hence its current name, The Rock Tower.

As for Rev Henry Hampton, his taste for controversy briefly revived in Wolverhampton – soon after arriving, he dismissed the church organist and sued him for slander. The court case gave publicity to various salacious rumours about Hampton – financial and personal – and, while Hampton narrowly won his case, his claim for £2,000 damages was reduced to a farthing (0.25p) by the jury. However, Hampton retained his enthusiasm for building and his ability to win the loyalty of a congregation: he stayed at St John’s for 18 years, carrying out renovations to St John’s and building two new churches and associated schools. When he died in his Wolverhampton vicarage in 1880, at the age of 76, the congregation of St John’s commemorated him with two stained windows and a memorial tablet. They can still be viewed today.

Note: Featured image is St George’s Tufnell Park Road Holloway by John Salmon, CC BY-SA-2.0. The above article draws on an unattributed document entitled ‘St George’s history without annexes’ which appears on the excellent website of the third St George’s Tufnell Park: https://www.stgeorgestufnellpark.org. The map also appears in that document. The copyright in the photograph of the Salonika church belongs to  Guillard Gerard. The other photographs are the writer’s.