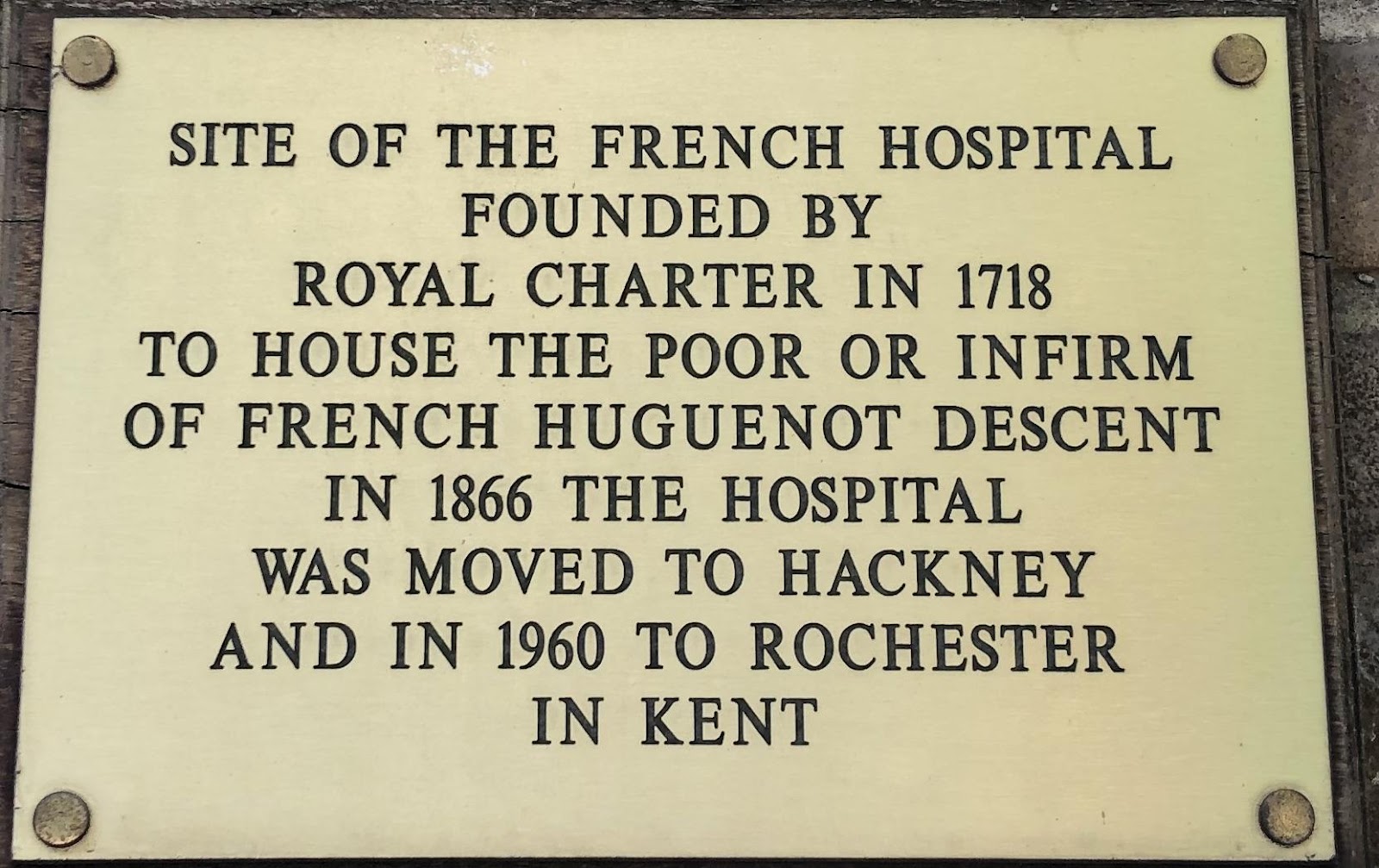 This discreet wall plate on a school in Bath Street, Finsbury commemorates the ‘French Hospital’, founded in 1718.

Then this Islington Borough green historic plaque marked the adjacent site of the rather more sinister-sounding City Pest House, established in 1593; sadly, it appears to have been mislaid during some recent building work.

Bath Street was previously called Pest House Lane and ran north towards the village of Islington, along the eastern border of land owned by the Ironmongers livery company. A recent map exhibition at London Metropolitan Archives included a beautifully illustrated 1633 map of the Ironmonger’s ‘Golden Acre’ north of Old Street, with the Pest House clearly marked.

So why pest house? London had endured waves of the plague for centuries, and one way of dealing with such devastating epidemics was to build isolation hospitals or ‘pest houses’ in the countryside outside the city walls. Those suffering from the disease were banished to the local pest house until either they recovered, or more likely died and were buried in plague pits, as this rather gruesome illustration shows.

Several epidemics raged through London during the 1600s until the huge outbreak of 1665, followed by the Great Fire of 1666. The Fire at least had the benefit of destroying some of the rodents and their fleas that spread the plague and the City Pest House fell into disuse. French Protestants, known as Huguenots, fled religious persecution in France during the later 17th century, leading up to the Revocation of the Treaty of Nantes in 1685. Many made their way to England and in 1681/2 the City of London authorities allowed the Pest House to be used as a temporary hospice for sick refugees. In 1718, a far more extensive French Hospital called ‘La Providence’ was built alongside on land rented from the Ironmongers, courtesy of a £1,000 bequest from Jacques de Gastigny, an earlier refugee from France. The new hospital – illustrated below in 1756 – could house up to 230 patients and was surrounded by orchards and market gardens. It was one of the first medical establishments to treat patients’ mental health as well as their physical ailments in a humane way.

As the 19th century unfolded, Finsbury became increasingly crowded, industrial and impoverished. In 1866 a new French Hospital resembling a small French chateau in the Victorian Gothic style was built near Victoria Park in Hackney. This was designed pro bono by the Huguenot architect Robert Lewis Roumieu, who also helped design (along with Alexander Gough) many Islington buildings including Milner Square and the building that is now the Almeida Theatre. In turn, the Hackney iteration of the French Hospital is now a school, but La Providence still continues today as almshouses for those of Huguenot descent in Rochester, where you can also visit the Huguenot Museum.
Contact guide Lesley Thompson who wrote this post for further information and forthcoming Finsbury walks at [email protected]  and https://lesleythompson.co.uk