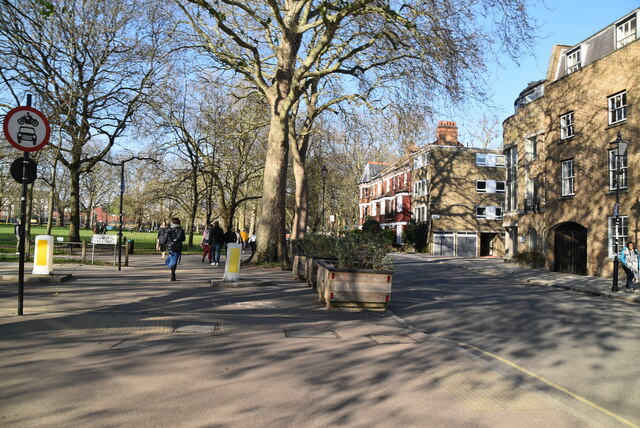 Highbury is an elegant Georgian and Victorian residential area on a gentle incline leading up to its highest point (160ft) of Highbury Hill. It contains 25 acres of open space called Highbury Fields and the ‘village’ of Highbury Barn. Before it developed in the late 18th and early 19th century, it was largely fields for dairy farming and some woodlands. Land had been owned by the Knights Hospitallers and is thought to have taken its name from a manor house there.

It is thought that the name Highbury comes from a manor built by an Alicia de Barrow who gave the land to the Knights Hospitallers in the 14th century moated manor house was lived in by the Grand Prior of the Knights Hospitallers, Sir Robert Hales. He was also the Lord Treasurer of England (equivalent to the Chancellor) and imposed a poll tax. In 1381, this resulted in the peasants of Kent and Essex instigating the ‘Peasants Revolt’. They initially went to the manor to find him. The area lay derelict for some time and was known as ‘Jack Straw’s Castle’.

From the 1700s, people would come out from the City of London for the cleaner air, great views and cream teas. In the 1770s, the first houses with a rural view were developed on the east side of Highbury Fields at Highbury Place. Some of the grand and elegant houses were built for wealthier people escaping the crowded, dirty City of London. Housing developed throughout the 1800s gobbling up the farms and fields. Housing development continued throughout the Victorian era, particularly as buses, the railway and tube system evolved enabling people to travel further to work making it less a place for the very wealthy.

Highbury Barn – Now more like the village of Highbury, Highbury Barn was part of the farmhouse on the Knights Hospitallers land which became a tea garden in the 1740s with fine views. It then developed into a significant entertainment venue where dinners for 3,000 people could be held with a concert hall and an open air dancing platform. By the 1860s it had become increasingly baudy and risque for the middle classes who now lived in the area and was eventually closed down. The Highbury Barn Tavern public house is on part of the site
today and opened in 1883.

Highbury Fields = Highbury Fields is the largest open space in the Borough and is protected as such. The fields are bound by elegant houses including Highbury Terrace, Highbury Place and Highbury Crescent. It was a place where people made homeless by the Great Fire London 1666 camped out. Cattle that were driven from far away on their way to Smithfield market would rest on HIghbury Fields to fatten up before being sold. The Fields have a swimming pool, war memorial for the Boer War and an old public toilet which commemorates the first gay rights demo in 1971.

Aubert Court – After the 2nd World War, this public housing was built for Islington Council in the art deco style by ECP Monson, and is described by Pevsner as having a ‘crisp and rational design’. The building was built with curved cantilevered balconies which provide great views to the west and a basement ballroom. Tony Blair’s government renovated the block in 2010.

Cubitt houses – Thomas Cubitt, the man who built much of Belgravia and Pimlico, built eight simple, flat-fronted houses on the east side of Highbury Park in 1820. Two of these remain today. He was known as the ‘Emperor of the Building Trade’ because of his innovative (at the time) model for housebuilding where he employed all the skills needed under one roof. This enabled him to build the large estates for landowners such as the Duke of Westminster.

Aberdeen Park – Aberdeen Park was first laid out in the 1850s as a gated estate with St Saviour’s Church, where John Betjeman worshipped as a boy, at its centre. The estate developed gradually with the final semi-detached houses built in the 1930s and blocks of flats, including the Newcome estate in the centre, added between the 1950s and 1970s.

Highbury Quadrant Estate – Highbury Quadrant Estate was the largest post-war social housing estate, completed in 1954 under the auspices of the Housing Division of the LCC’s Architecture Department which employed 250 architects. The Estate contained 611 dwellings surrounded by green spaces and flats were described as “gold dust” by the first residents.

K2 Telephone Kiosk Outside Number 137, Highbury New Park = One of 400 remaining examples, 1700 were originally installed, of Britain’s first red telephone kiosk introduced in 1926 after Sir Giles Gilbert Scott won a competition two years earlier to find a design for a national kiosk.  All surviving K2s, which are mostly found in London, are Grade II listed by Historic England.

Highbury Square Stadium, former Arsenal Stadium, Averell Road – Arsenal relocated from Woolwich Arsenal to Highbury in 1913 and the Stadium was constructed over the summer in that year in time for the first game of the new season to be played there. It remained Arsenal’s home ground until 2006 when the Emirates Stadium opened, and is now a housing development although the East stand remains as a Grade II listed building.

Rt Hon Joseph Chamberlain (1836-1914) at 25 Highbury Place. A minister in Prime Minister Gladstone’s Cabinet in the 1880s, lived in Highbury Place as a child. He made a career in Birmingham as a manufacturer of screws and developed a political career taking forward reforms to housing and sanitation. He became Mayor and then MP for a Birmingham constituency. He named his house in the Birmingham suburb of Moseley ‘Highbury Hall’.

Alexander Aubert (1730-1805) lived at Highbury House at top of Highbury Hill now demolished. Aubert was an insurance broker who was director of the London Assurance Company and Ramsgate Harbour. He was an amateur astronomer who installed the best equipped observatory in his garden. He had 74 acres of garden with vines, peaches, nectarines and tobacco.

Captain Joseph Hoddart (1741-1816) lived at 12 Highbury Terrace. Hoddart retired from the East India Company in 1788 and lived in the terrace between 1792 and 1816. He was a mariner and navigator who charted oceans including off Sumatra, Anglesey and Lands End and also involved in the development of lighthouses. He found a way to strengthen rope and owned a rope factory in Limehouse – he could see the Thames and Docks from his house.

Charles Alfred Cruft (1852-1938) lived at 12 Highbury Grove now demolished. Cruft worked for Spratt’s Dog Biscuits before starting Cruft’s Dog Show for all breeds in 1891 and the show  ran every year until 1939 in the Agricultural Hall, Islington. There is a LB of Islington plaque on a modern block of flats opposite the site.

Walter Sickert RA (1860-1942) artist Sickert was a member of the Camden Town Group of Post-Impressionist Artists and caused controversy by painting urban scenes and ordinary people, often prostitutes. He opened a School of Art at 1 Highbury Place, which ran from 1927 to 1934 and is commemorated by a LB of Islington plaque.

Eileen Whelan (1911-2021) cricketer. Whelan was born in Highbury, and played in seven Test matches for England as a specialist bowler between 1937 and 1949 in which year she played a career best scoring 100 runs and taking 5 wickets in a single match. She also became the longest lived cricketer and, at 109, was one of the oldest people to receive a COVID-19 vaccine.

Jesse Birdsall (1963-) actor. Born and brought up in Highbury

Edward Teschemacher (1876-1940) popular songwriter. Born in Highbury and lived at 1 Highbury Park. Wrote the lyrics for more than 2000 songs between 1900 and the late 1920s including the sentimental smash hit “Because (God made you mine I’ll cherish thee) which was recorded by Caruso and sold more than a million copies.

Highbury Fields, UK’s first Gay Rights demo in November 1970, The rally was organised by the Gay Liberation Front which had been set up in October 1970 at the London School of Economics, it was one of GLF’s first actions with 150 GLF members holding a torchlight vigil to protest against police harassment. In November 2000 a plaque was unveiled to commemorate the 30th anniversary of the rally attended by local MPs Jeremy Corbyn (Islington North) and Chris Smith (Islington South and Finsbury).

22 Highbury Terrace Four Weddings and a Funeral film location: the reconciliation in the rain at Charles’s flat.

Quandrant Estate visit by Soviet Minister of Culture in 1957. He was accompanied, according to local residents, by a “coach-load” of Russians. The design of the Estate was the inspiration for Soviet-era housing in Moscow.