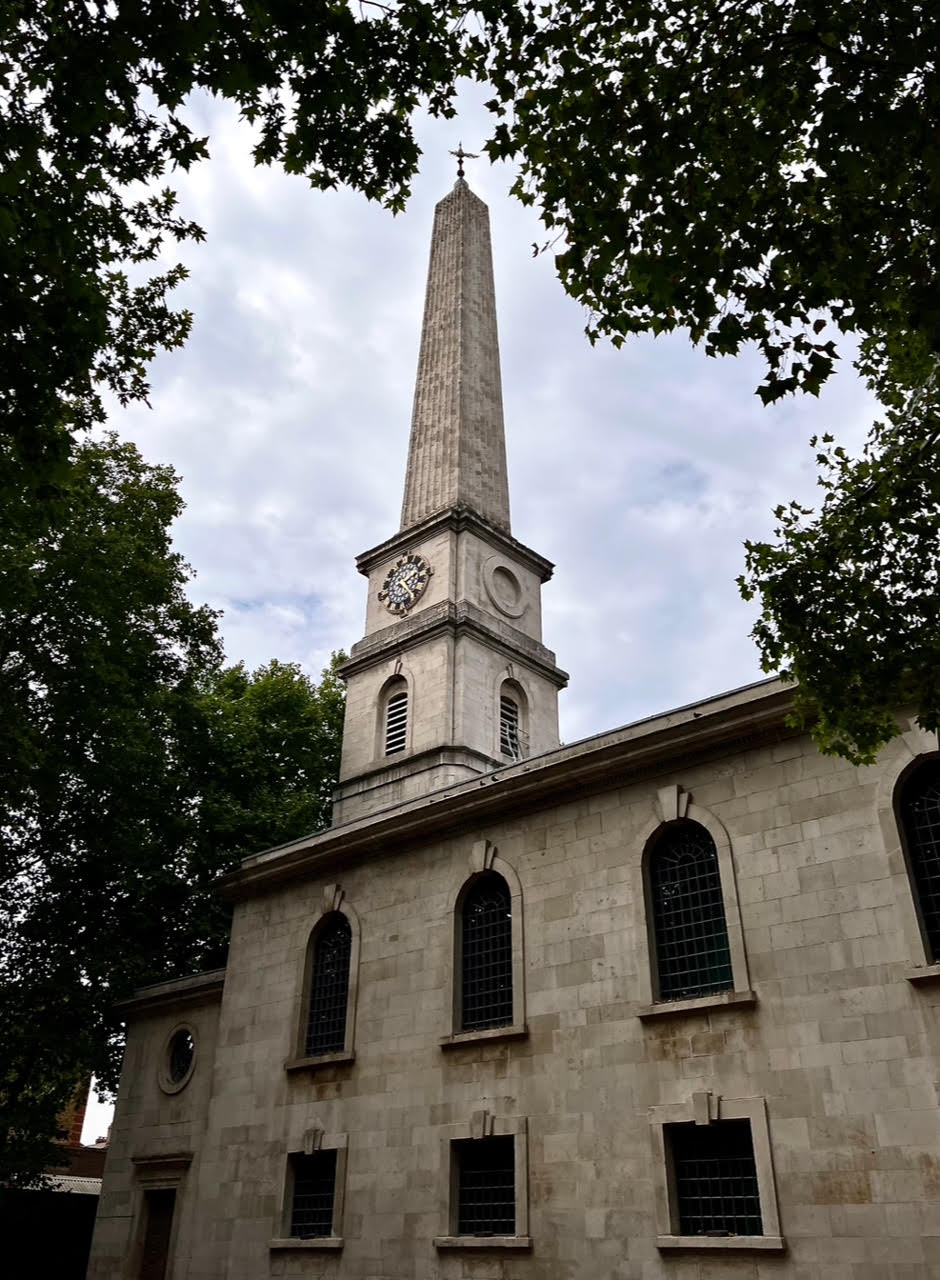 If you are interested in old graves and burial grounds, social history or listed buildings, this area of Islington has much to offer. From the art deco on one side of Charterhouse Square to the ancient Monastery building on the other, from the site of the first public park to the church that formed a new parish, Finsbury is an area of contrasts.

Lying just outside the old City walls and therefore outside its jurisdiction, the Finsbury area attracted industry, skilled crafts and entertainment. Medical and religious institutions also flourished here, as did sadly poverty and overcrowding.

Explore Finsbury and see how much modern Finsbury owes to the people and historic institutions that shaped it.

Finsbury was an ancient area outside the City walls, its name deriving from possibly Vinisbur or Fiennesbury (the Fiennes family estates). Originally fields and open spaces, the south west of the area became the site of one of the great monastic institutions, a Carthusian monastery founded in 1371. Another part of the area, the Finsbury Field which was adjacent to Moor Field and boggy from the Walbrook, was drained and became the first City park in the 16th century. It was used for archery and exercise before it was eventually built over. The Great Fire of London in 1666 saw a huge tented city here as thousands of displaced persons sought refuge.

The Finsbury area was once part of the parish of St Giles Cripplegate – this historic church still stands, right on the edge of the old walled City. St Giles’ parish was split into two, ‘within’ or inside the City walls, and ‘without’ or outside. As the population grew new churches were needed and from 1733 the ‘without’ area became the new parish of St Luke’s Old Street. The 18th Century was a time of increasing population, religious dissent and experimentation and it was here in 1778 that John Wesley built his Methodist chapel. The Quakers had already established a burial ground here a century before, Bunhill Fields became a dissenters’ cemetery and Finsbury became renowned as a non-conformist area.
The 18th Century also brought increasing industrialisation and eventually by the 19th Century overcrowding and poverty. In 1800 the population of Finsbury was 5 times that of Islington. Finsbury became a borough in 1899 and then was amalgamated with Islington in 1965. Finsbury was one of the poorest London Boroughs up to the 1930’s and following WW II and the extensive bomb damage it suffered, a programme of slum clearance and rebuilding was instituted. Now Finsbury is home to Silicon Roundabout and London’s cluster of technology start-ups.

The Charterhouse – A large former monastery on Charterhouse Square. Dating from the 14th Century it has seen life as a Carthusian Monastery built on the site of a plague pit, a Tudor mansion, a school for the young and a hospital plus almshouses for the elderly. Charterhouse School relocated to Surrey in 1872 but the Almshouses remain. It is now run by a charitable trust and has opened its doors to the public for guided tours and special events.

Florin Court – An art deco residential building on Charterhouse Square. Used in many films and television programmes including the Poirot series, has a swimming pool in the basement!

Honourable Artillery Company – Oldest regiment in the Army established during the reign of Henry VIII when artillery included longbows and crossbows. On this site since 17th Century and the only regiment in City & Royal ceremonies allowed to march with ‘drums beating, colours flying, bayonets fixed.’ There is a free museum here, open by appointment. The Artillery Ground is also famous as an early site of cricket matches and the first Hot Air Balloon ascent.

Bunhill Fields – originally the ‘bone hill’ where contents of St Paul’s churchyard and charnel house were dumped in 1549, then became known as Mr Tindall’s Burial Ground and in turn the ‘Dissenters Valhalla’. Many famous people are buried here and several of their tombs are Grade II listed. It was closed to burials in 1854 when the Metropolitan Burials Act established many outer London cemeteries, Abney Park being for non-conformists.

St Luke’s Church – built in 1733 as a result of the ‘50 Churches Act’ (only 12 were completed) and funded by duty charged on coal entering London. The architects were Nicholas Hawksmoor and John James. It was closed in 1959 and then stood roofless and derelict for almost 40 years until saved by the London Symphony Orchestra.  It is now home to their community and education programme and music rings out from the practice rooms in the crypt. Bruce Springsteen has played here.

Peerless Pool – in 1743, William Kemp developed a perilous natural pond – where several youths had drowned – into a smart swimming pool. It was the world’s first open air pool with marble steps, a changing area and later a plunge pool, bowling green and even a library. In winter it became a skating rink, but this world’s first closed in 1850 only to be remembered in the names of streets nearby.

Whitecross Street – today noted for ever changing street art, but takes its name from the white cross of the mediaeval Knights Hospitallers when it marked the boundary of their estates. Fast forward to the Victorian era and Whitecross Street was the site of a debtors prison mentioned by Dickens in ‘Pickwick Papers’. By 1963 it featured in the film ‘What a Crazy World’ starring Joe Brown and Freddie and the Dreamers.

Pest House/French Hospital – dating from the 16th century, if you suffered from plaque you might be sent to one of the London Pest Houses. This one at Moorfields was pressed into use in the recurring episodes of plaque in the 1600’s. Those that died, and there were many, were buried in plague pits here and later a hospital was built by Huguenot refugees who had taken over the decaying buildings. This hospital founded in 1718 had a chequered career and has finally settled in Rochester Kent, in the form of almshouses for those of Huguenot descent.

Fortune Theatre – was opened by Edward Alleyne and the Admiral’s Men in 1600. Like other theatres of the day it was burned down several times and then closed in 1642 by the Puritans who did not hold with such entertainment. Edward Alleyne, who was regarded as one of England’s greatest actors of the time, went on to found Alleyne’s school in Dulwich, still an independent school today.

Wesley’s Chapel. Home of the Methodist movement started by John Wesley in the 18th Century. Wesley laid the foundation stone for this chapel in 1777. Previously he had preached in St Mary’s Upper Street from where he was subsequently banned and then at St Luke’s Old Street. The Chapel has been restored and enlarged, Wesley’s house next door is now a museum.

Margaret Thatcher – the former Conservative Prime Minister was a Methodist and married at Wesley’s Chapel, City Road on 13th December 1951.

George Dance – father and son ‘the Elder’ and ‘the Younger’ were both named George, and both notable architects with a family home in Chiswell Street. Dance the Younger built Wesley’s Chapel in 1778.

William Blake – (1757-1827), a poet, painter, visionary & printmaker; his grave is in Bunhill fields and he is celebrated in street art and a pub named after him on Old Street.

John Bunyan – (1628-1688), the non-conformist preacher and author of ‘Pilgrims Progress’ is also buried in Bunhill fields.

Krays – the infamous Kray twins, East End gangsters were arrested in May 1968 at their mother’s home in Braithwaite House on Bunhill Row. This is where they spent their last night of freedom.

William Caslon – designed typefaces and started a pioneering type foundry in 1737 – there is a blue plaque in Chiswell Street. His family grave is still visible at St Luke’s Old St.

Walter de Manny – founder of a chapel in 1348, which became a Carthusian monastery and eventually The Charterhouse. His grave was found during renovations and is visible near the entrance to The Charterhouse museum.

George Fox – (1624 – 1691) was an English Dissenter and a founder of the Religious Society of Friends, commonly known as the Quakers or Friends.

Mary Wollstonecraft – (1759-1797) feminist icon, writer of ‘The Vindication of the Rights of Women’ and friends with John Keats lived in Finsbury Square. Mother of Mary Shelley who wrote Frankenstein, the world’s first science fiction novel.

Dr George Birkbeck (1776 –1841) was another Finsbury Square resident, recognised as the founder of adult education who established the London Mechanics Institute 1823. This became the Birkbeck Literary and Scientific Institution in 1866 (now Birkbeck College, part of the University of London).

The Great Plague in the 1600s, the Pest House which became the French Hospital

Great Fire of London in 1666, led to a tent city on Moorfields

Moorgate Train Disaster – 28th Feb 1975 when 43 people died; plaque on side of wall by the Elizabeth Line and on Finsbury Square