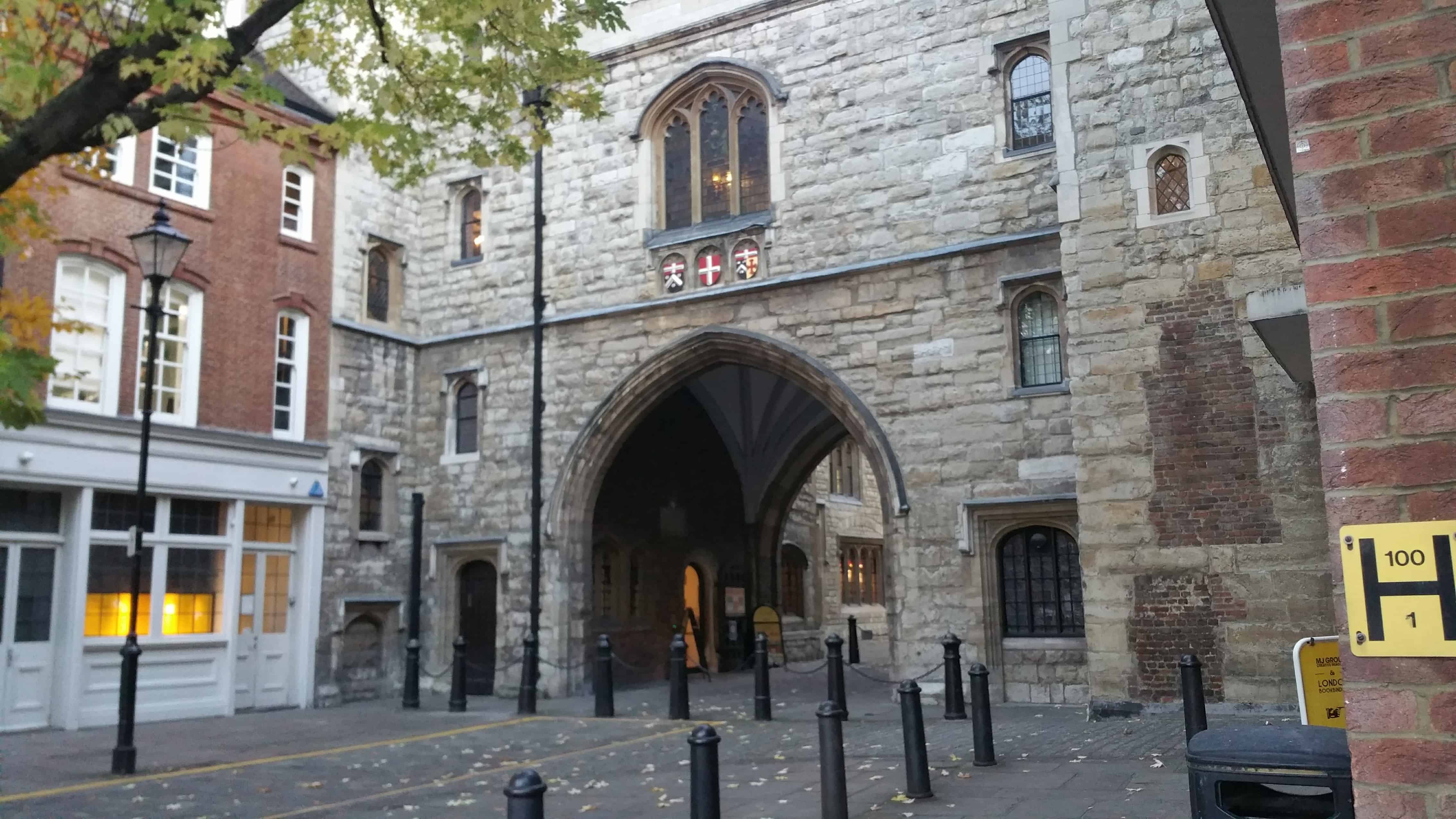 A walk through Clerkenwell is a journey into a thousand years of history. Once a pastoral tranquillity of rural religious houses and one of London’s early medieval suburbs with its wells, rivers and Mystery Plays.

More up to date it has one of the first Underground stations and the latest Crossrail station. But it also has a dark side with its prisons and revolutionaries such as Lenin and the Fenian Brotherhood.

Clerkenwell took its name from the water source of the Clerk’s Well in the precincts of the medieval priory. The area was a small village on the outskirts of the City of London and it was here that the monastic order of the Knights Hospitallers of St John at Jerusalem had its English headquarters at the Priory of Clerkenwell. Every year Clerkenwell performed what was known as the Miracle Plays. Stories from the Bible or the lives of saints performed on stages by the clerks of London at the Clerks Well. By the time of Elizabeth I reign, the area with its wells and fields close to London, attracted the nobility who built mansions as their town houses.

By the middle of the 17th century Clerkenwell was changing from a largely residential to increasingly industrial area. Much of this industrialization was to do with the influx of French Huguenots into the area. They set up their workshops deliberately outside the city where they could practice their craft skills unmolested by the City livery companies.

The Industrial Revolution brought great changes to the area. Small industries and workshops thrived such as printing and paper making, enamelling, engraving, clock making and gunsmithing. Breweries and distilleries were based here and the area became famous for its gin making. Although the area saw a decline after the Second World War it has now seen a revival boasting the highest concentration of architects and building professionals in the world. Today the old factories have been converted into loft living accommodation and it has a vibrant night life of pubs, bars, clubs and restaurants. Although a modern outpost of the City, Clerkenwell still retains its character with much evidence of its historical past with some fine examples of Medieval, Georgian, Victorian and Modern architecture.

Charterhouse – A Carthusian priory, founded in 1371. Up to 25 monks lived in cells, some of which survive. Thomas More when studying law took part in prayers with the Carthusians and wore a hair shirt as penance. Following the priory’s dissolution in 1537, it was rebuilt to become one of the great houses of Tudor London. In 1611,Thomas Sutton bought the property and after established a school for the young and an almshouse for the old.

St John’s Gate – Inner gatehouse of the Priory and English headquarters of the Knights Hospitallers of St John at Jerusalem who cared for the pilgrims in the Holy Land and wore the ‘Maltese Cross’ following their tenure of the island. The Order was dissolved and the gatehouse used as the Elizabethan Master of the Revels office, a coffee house run by William Hogarth’s father and the offices of Edward Cave’s The Gentlemen Magazine. The Most Venerable Order of St John was revived in the 19th century and the building is the National HQ of the St John’s Ambulance Service.

St John’s Church and Crypt – The church was rebuilt in 1950s after the existing church had destroyed during WW2. Original church on this site was Norman now the only Norman crypt in London. Granite setts on the ground show the position of the original octagonal nave of the first priory church built in the 12th century. Probably the first building on the Priory site at the heart of the Inner Precinct. The church was modelled on the Church of the Holy Sepulchre in Jerusalem. The circular shape was characteristic of the Hospitallers and Templar churches.

Farringdon Station – In January 1863 a banquet was held for 700 dignitaries and shareholders for the opening of the world’s first underground railway from Paddington to Farringdon – The Metropolitan Railway was built by the ‘cut and cover’ method and used gas lit open and closed railway carriages pulled by steam locomotive.

In 2022 in the Queen’s Jubilee year a new Farringdon station was opened. Part of Crossrail – The Elizabeth Line – running from Reading in the west to Shenfield and Abbey Wood in the east.

The Clerk’s Well – Was a fresh water spring in the precincts of the medieval priory. By the early 19th century with pressure on fresh water the well is now brought up to pavement level. Local industry particularly brewing polluted the source. By 1856 the well is built over. In the 20th century the well was rediscovered and is now open for viewing by appointment.

Spa Green EstateIs – the most complete post-war realisation of a 1930s radical plan for social regeneration through Modernist architecture. Conceived as public housing, it is now a mixed community of private owners and council tenants. In 1998 this work by the architect Berthold Lubetkin received a Grade II* listing for its architectural significance, and the major 2008 restoration brought back the original colour scheme, which recalls Lubetkin’s contacts with Russian Constructivism.

Finsbury Health Centre – Built in 1935–38, designed by Berthold Lubetkin and the Tecton architecture practice. The design shares some of its materials and detailing with similar Lubetkin projects of the period. Partly restored in the mid-1990s, the building is Grade I listed.Grade I listed.

Middlesex Sessions House – Known as the ‘Old Sessions House’ built in 1782 replacing the old magistrates court ‘Hick’s Hall’ in St John’s Street designed by Thomas Rogers. Of all the London courts this had the worst reputation for the harshness of its sentencing ranging from flogging, the stocks or the pillory, incarceration in one of the three local prisons, to transportation to the colonies.The Old Sessions House is now an upmarket bar and club.

Marx Memorial Library – Originally an old dairy building was converted into Welsh Charity School. In the 1800s meetings of Karl Marx’s International Working Men’s Association are held here. Lenin wrote from here Iskra (The Spark) the paper of the Russian Social Democratic Party. 1930s-Marx memorial Library and Workers School is set up to commemorate Marx after the Nazi ‘book burning’ on the 50th anniversary of his death. 1930s-Fresco by Jack Hastings pupil of the radical Mexican muralist Diego Rivera depicting the overthrow of capitalism. ‘Lost’ for fifty years. The library now houses a remarkable collection of Radical and Chartists literature and is the official archive of the International Brigade.

The House of Detention – built on the site of two earlier prisons, the Clerkenwell Bridewell for convicted prisoners and the New Prison for those awaiting trial. Original walls survive together with the Prison Superintendents house – no windows to the street to prevent escape.

The Clerkenwell Bridewell’s most famous prisoner was Jack Sheppard who escaped with his lover and then twice from Newgate before being hung at Tyburn. The prison closed in 1794 and its functions were taken over by the Coldbath Fields Prison at Mount Pleasant. The New Prison was rebuilt in 1818 and in 1847, at which time its name changed to the House of Detention.

It was the busiest prison in London and in 1860 over 7000 men and women passed through there. It was demolished in 1890. The site is occupied by the Hugh Myddleton School building, now converted into flats. The vaults beneath, now known as the Clerkenwell catacombs remain. They were reopened as air-raid shelters during the Blitz, and can still be accessed via an entrance on Clerkenwell Close.

Edward Cave Printer, editor and publisher. He coined the term ‘magazine’ for a periodical, founding The Gentleman’s Magazine in 1731. First publisher to successfully publish a wide-ranging magazine. Magazine offices based in St John’s Gate and worked alongside Samuel Johnson. Buried in St James’s Church.

William Hogarth Painter, printmaker, pictorial satirist and social critic. Born in Bartholomew’s Close, baptised in St Bartholomew’s Church. Famous works include Beer Street, Gin Lane and Rake’s Progress. His murals The Pool of Bethesda and The Good Samaritan are to be seen on the staircase on the way to the Great Hall of Bartholomew’s Hospital where he was a Governor of the hospital.

Edmund Tylney Master of the Revels in Elizabethan England. Responsible for vetting plays and playwrights and ensuring censorship of controversial topics. Offices based in St John’s Gate.

Clerkenwell Design Festival An annual festival showcasing the best in design of architects, interiors, furniture and building professionals. Most based in the local area.

Or contact the authors of this blog Graham Scrivener, Joanna Moncrieff and Neil Sinclair.