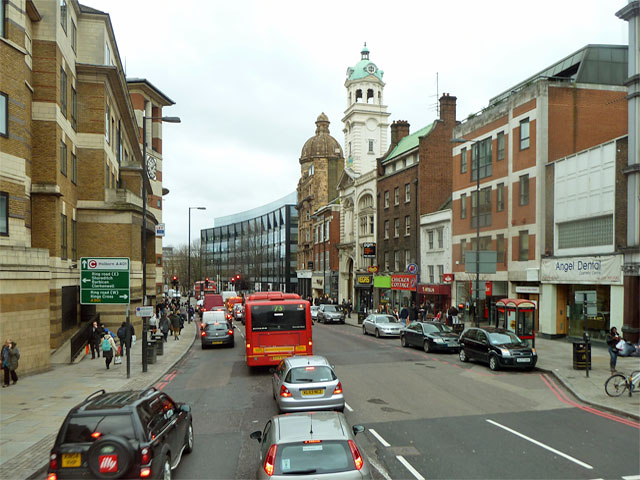 This is a vibrant, diverse community with one of the youngest average ages of any London borough. The Upper Street area is lined with lively restaurants, bars and shops.

The area has significant entertainment links. It includes the sites of some of the country’s early purpose-built cinemas, one of which still functions as a cinema today, after over 100 years. Union Chapel is both an impressive music venue and a striking Grade I listed building. Another unusual entertainment venue is a dedicated puppet theatre which has delighted both adults and children for sixty years. The area was also home to one of the last surviving major Victorian music halls, which was still operating into the 1950s.

The area has a long history, possibly going back to ancient British times. It contains the historic heart of Islington, around Islington Green, the site of Saxon Iseldon. The nearby St Mary’s church goes back certainly to medieval, and, perhaps, to Saxon times. Today the Green includes an unusual modern war memorial and a statue of Sir Hugh Mydlleton, architect of the New River, which has been a significant part of London’s water supply for over 400 years – part of its original route can be seen within this area.

Islington was extensively developed in the Georgian period and still contains one of the greatest numbers of Georgian squares anywhere. At least three notable squares Gibson, Milner and Canonbury lie within this area. Canonbury Square includes a former residence of George Orwell.

Another feature of this area is the Business Design Centre which is both one of London’s greatest surviving Victorian exhibition spaces, and a thriving centre for local business today.

History of the area

Upper Street may lie on the line of a prehistoric road and the village of Iseldon was the first settlement on the original Great North Road from London to Scotland. The surrounding area remained largely rural till the eighteenth century, though for hundreds of years before that large numbers of cattle and sheep had passed through Iseldon on their way to slaughter at Smithfield, London’s main meat-market. This continued up to the 1850s when the new Metropolitan Cattle Market off Caledonian Road was opened.

From the late eighteenth century the area was increasingly developed and became one of London’s desirable new suburbs. It later passed through a period of decline and hardship, and then a more recent renaissance. From the time of Tom Paine, Islington has had associations with radical politics, and has been linked with the suffragettes and the Communist party.

The Victorian period saw both the boom in places of entertainment in this area and the construction of the great exhibition space of the Royal Agricultural Hall. Although, as its name indicates, this was built for animal shows, it soon became a venue for many other activities from Crufts dog-show to tightrope-walking to evangelistic revival meetings.

Though poorer parts of Islington remain, since World War II there has been much gentrification and redevelopment. Locations such as Angel Central and the new Islington Square development are evidences of this.

Business Design Centre [Royal Agricultural Hall] This is a striking piece of Victorian architecture, comparable in scale to one of the sections of Paddington station. It was originally a venue for Victorian livestock exhibitions. It also became the home of Crufts, Queen Victoria exhibited dogs at the first show in 1891. Its height made it suitable for circus displays and in 1894 Blondin, the first person to tightrope walk over Niagara Falls, performed here. In 1875, the climax of a national campaign by the American evangelists Moody and Sankey drew tens of thousands here a night. This was the largest event of its kind in Britain till the twentieth century Billy Graham campaigns. In World War II the Hall was requisitioned by the GPO, who were there till 1971. It was then neglected, and was nearly lost. However, it was reborn under Sam Morris, with a £12M renovation in 1985. Now it is once more an exhibition space, but also a major resource for local industry, providing spaces for many local businesses.

Islington Green [Myddleton statue, War memorial] The Green was once part of the original Iseldon settlement, perhaps twenty or thirty wooden houses around it in Saxon times.

War memorial::  A controversial modern replacement of a previous more traditional “temporary” memorial that had lasted 90 years. Eight-ton granite ring from quarry in China, artist John Maine. Plaques to the five Islington-born winners of the Victoria Cross by the memorial, including Frederick Parslow, at 59, the oldest winner of the VC in World War I, who saved a cargo of a thousand military horses from U-boat attack, at the cost of his life.

Sir Hugh Myddleton statue:  Myddleton was a wealthy Welsh goldsmith and jeweller to King James I, whose finances and royal influence enabled the successful completion of the New River in 1613. This had been begun by Edmund Colthurst, in 1604, but insufficient funding and other issues prevented its completion before Myddleton became involved.

Collins’ Music Hall This was a tavern, then a music hall from 1863 till the 1950s, and was among the last such venues. It once had 1800 seats and 10 bars. It had a string of famous performers. Among them were Marie Lloyd, known for her bawdy comic songs and battles with the moral Vigilance Committee, Vesta Tilley, an outstanding early male impersonator, Gracie Fields, Charlie Chaplin, Norman Wisdom and Tommy Trinder.

Screen on the Green One of Britain’s oldest surviving cinemas, that is still operating as a cinema. Opened in 1913 as the Empress Electric Cinema. After several refurbishments, it has been Screen on the Green since 1970. Now aimed at a luxury experience. The nearby Electric Cinema (Café Nero in 2017) is older still, opened 1909, one of the first purpose-built cinemas in Islington, but remained a cinema only till 1916. Some of its original decorations, dome and figure of Electra remain.

St Mary’s Church There has been a church here at least since 1101, possibly since before 1066. Rebuilt several times, most recently after World War II bombing. It has links to significant figures in Islington history, including Dame Alice Owen and Richard Cloudseley.

Little Angel Puppet Theatre A unique theatre, wholly dedicated to puppetry, puppets are still manufactured in the workshop attached to the theatre. Bought by John & Lyndie Wright (1961) from a bomb-damaged church hall for £750. The adjacent cottage became their home, John has died but Lyndie is still often to be seen in the workshop after 60 years linked with the site.

Union Chapel The chapel is a major piece of Grade I listed Victorian architecture. A place of worship for two nineteenth century prime ministers, it was one of the earliest attempts at a combined congregation of Anglicans and Nonconformists. Today it is an unusual combination of a living church, with an active social outreach program, and a popular secular music venue. It contains a relic of the Mayflower (a fragment of the Plymouth Rock) and a very rare hydraulically-powered organ still in full working order.

Highbury Corner/ Highbury & Islington station. This area’s layout is still a legacy of the wartime V1 hit to which there is a memorial plaque. Portions of the former grand station destroyed in the blast, remain visible. It has been enhanced by recent partial pedestrianisation and layout improvements.

Gibson & Milner Squares Highlights include a Victoria line ventilation shaft disguised as a Greek shrine. Residence of Stephen Fry and Penelope Lively. Both squares named after Thomas Milner Gibson, a nineteenth century MP who defected from the Tories to the Liberals and campaigned for the repeal of newspaper stamp duties – the “taxes on knowledge”.

Almeida Theatre The theatre occupies the premises of a nineteenth century literary and Scientific society that was later a Salvation Army hall.  A 300-seat theatre opened in 1980 and hosted touring companies, including Ken Branagh’s ‘Not the RSC Co’. Later it became a producing company. Performers have included Diana Rigg, Harold Pinter and Kevin Spacey.

King’s Head Theatre One of Britain’s earliest pub theatres, operating since 1970. It was significant in the early careers of Victoria Wood and Hugh Grant. [Apparently due to move to a new venue in Islington Square.]

Islington Square Formerly a postal sorting office this is a mixed residential, retail and entertainment development, including a subterranean cinema. It hosts restaurants with a range of international cuisines, and experimental theatrical space.

Angel Central Formerly the N1 centre, this shopping centre was expanded and relaunched in 2015. Fronted by the spectacular Angel wings statue it includes a nightclub as well as a range of retail space.

Astey’s Row Rock Garden  This is a signposted portion of the New River route within this area.

Tom Paine [wrote Rights of Man at the Angel]