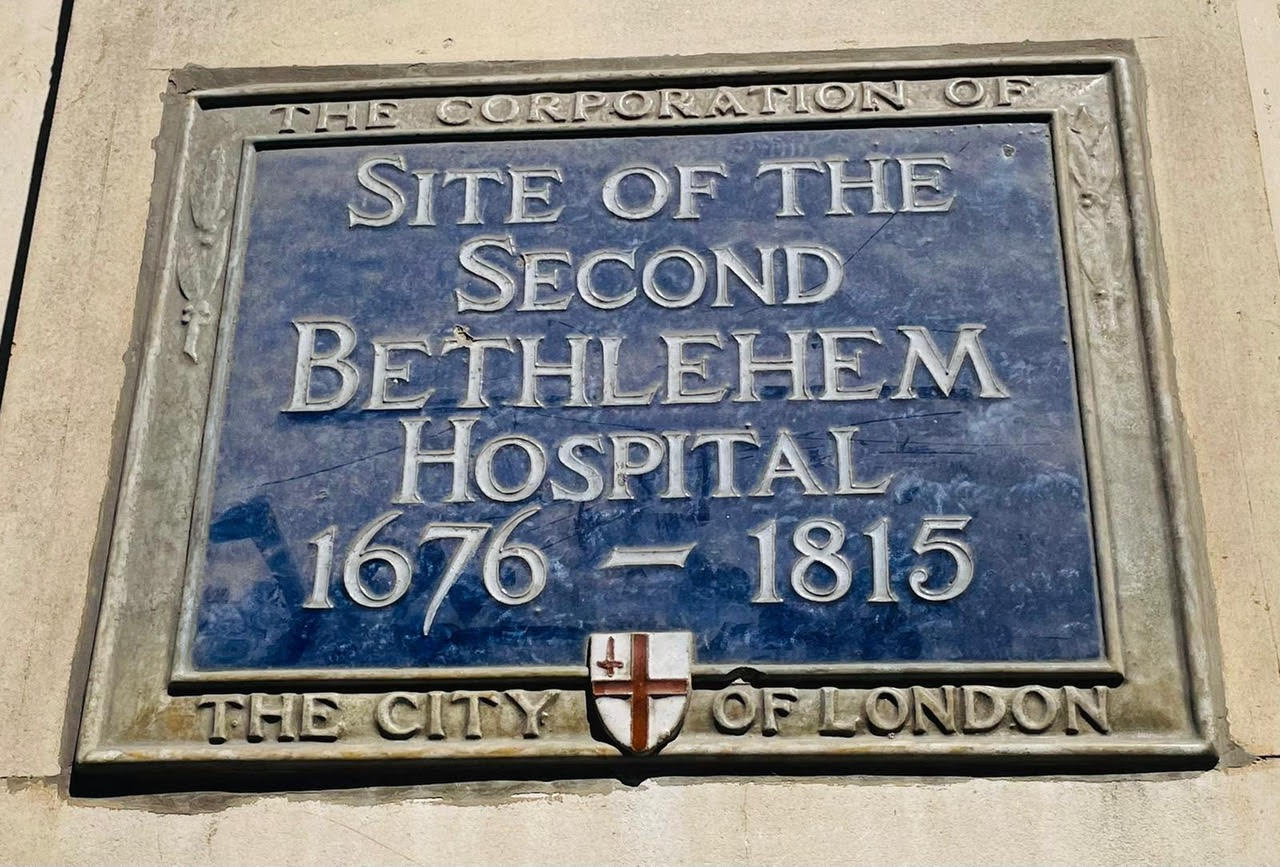 The area of Finsbury has a strong connection with Medicine, and to start off, here is a post that looks at the Bethlehem Hospital – in the City of London, but just outside the Moorgate. The hospital led to many Doctors and Physicians living in the area around Finsbury Circus, and this led to the building of many medical facilities outside the City in the Islington area of Finsbury – including the St Luke’s Hospital for mental health which will be discussed in the future post.

Bedlam (as it became known) was one the most macabre and first tourist attractions, featured in some guidebooks of the day.  This was the first ‘purpose built’ institutions for the mentally ill.  Originally intended to hold 120 patients, but ended up slightly more.  It appears to use to be a very strange way to fill your day. Entrance to view the lunatics was 1d apart from 1st Tuesday of month when it was free to get in. Some people would visit on the pretext they were visiting mentally ill relatives, others would visit to provoke and tease the patients.  Indiscriminate visiting of the public however ended in 1770 by order of the governors.

A plaque states ‘Site of the Second Bedlam Hospital 1676-1815.  There is a great map of the area at Map showing Bethlem Hospital, Moorfields, in 1799 (studymore.org.uk) – if you look at this you can see the location in 1676. The first hospital however was located in what we now refer to as the Liverpool Street area of London, not too far away from Moorgate.   The ‘Palace for the poor lunatics’ as it was often referred to was located at Moorfields from 1676 to 1815 as the below timeline indicates.  Bedlam still exists in the form of Bethlem Royal Hospital and is currently located at Monks Orchard Road in Beckenham, South East London. where there is still a museum you can visit today.

From the time the hospital opened there were always wards for both men and women, with men housed in the East Wing and women in the West. Patients time would vary depending on the reason they had been admitted as the below two tables demonstrate.

Data in these tables are derived from the 98 extant petitions for admission.

There were many occupations associated with Bethlem from Physician, Clerk, Surgeon, Apothecary, Steward, Porter, Matron, Basket Men, Assistant Basket Men, Maids, Gallery Maids, Laundry Maids, Cook and Accountant. After 1843 the records no longer include the job title of Basket Men. Instead there are Male Attendants and Female Attendants.

Although not based at Moorfields (but at the Liverpool street location) I find it fascinating that one of the Masters of Bedlam was George Boleyn (brother of Anne Boleyn). He was Master of Bethlem from 1529 until his execution in 1536 – executed 2 days before his sister Anne on 17th and 19th May 1536. I wonder if he was the only member of staff to have been executed.

Of the many famous patients at Moorfields I have selected two.  One of an attempted assassin attempt on George III and another of a patient very badly treated for about 10 years.

Margaret ‘Peg’ Nicholson (1750 – 1828)  An Englishwoman who assaulted King George III in 1786. Her attempt on the King’s life became famous and was featured in one of Shelley’s first works: Posthumous Fragments of Margaret Nicholson, published in 1810. As George III arrived outside of St James Palace on 2nd August 1786, she pretended to present him with a petition, which turned out to be a blank piece of paper, and instead attempted to stab him with an ivory-handled dessert knife.  She was duly restrained. George III, took pity on her insisted she was not harmed as he said that she had not harmed him.   She was certified insane under the Vagrancy Act 1744 and admitted to Bedlam where she died there 42 years later

·James Norris – 1814 –  It is claimed that James (an American seaman), thought to be a violent patient, was chained to a post for over ten years. It is said that he could not be restrained by manacles as his wrists were larger than his hands and he could slip out of them and use the manacles as potential weapons.  In 1814 he was discovered in Bedlam with a chain from the collar around his neck which allowed him to move only as far as the edge of the bed.  This became the subject of a vocal reform campaign and highlighted the poor conditions within the Moorfields building.It was his case that led to the government enquiry and the passing of Englands Mad House Act of 1828, which set out the legal framework for regulating ‘madhouses’.

Finally as you would also imagine there is a possibility that the place could still be haunted.  Pre lockdown I spoke to a member of staff in the building that has the plaque on the wail.  The member of staff that worked there said that someone on reception working alone saw ‘the devil’ and called police, needless to say there was nothing there, but there are rumours as to if it is haunted, hardly surprising really

William Hogarth the 18th century artist, depicts images of what Bedlam would have been like in a series of eight images entitled Rakes Progress – images of which can be found using this link: A Rake’s Progress – Wikipedia