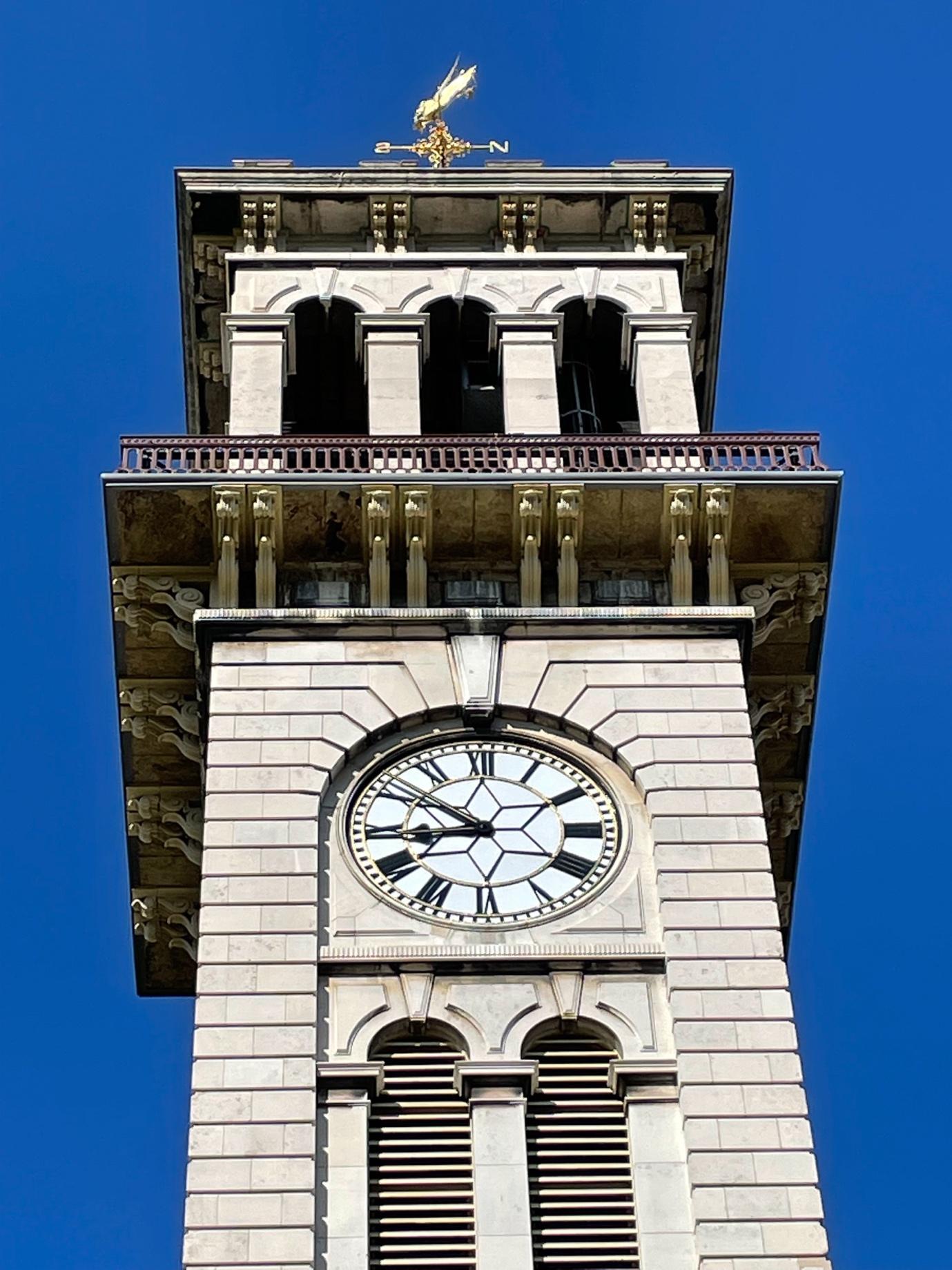 Walking through Holloway is like leafing through an encyclopaedia of architectural styles – commercial, church and residential – from the late 18th century to the present day. Each sub-area has its own character, and the transitions can be dramatic: when York Way (predominantly commercial and light industrial) crosses Camden Road it becomes Brecknock Road and transforms into the high street of a leafy village. And nothing in the remainder of Holloway Road prepares the visitor for the extraordinary appearance of the Graduate Centre of London Metropolitan University.

Holloway is also remarkably green. Enthusiastic tree planting along roadsides and in gardens since the 19th century has resulted in shady streets full of mature trees – even Holloway Road has a leafy terrace beside the National Youth Theatre. Added to which Holloway contains three beautiful green spaces: Caledonian Park, with a clocktower that affords remarkable views over London; Paradise Park, with its poignant memories of the Second World War; and the beautiful, wooded churchyard of St Mary Magdalen.

By 1307 the stretch of the Great North Road that passes through our area was known as ‘the Holloway’ – and for the next four centuries, ‘Holloway’ consisted of a few inns and other buildings along that stretch of road (today known as Holloway Road). A 1746 map shows only one building elsewhere in the area: Copenhagen House, a building claimed to have an ancient (if rather vague) historical connection with Denmark. The rest of Holloway was farmland.

It wasn’t until the 1760s that the first tentative steps were taken towards developing the interior, and the process accelerated in the first half of the 19th century when new roads, such as Camden Road and Caledonian Road, were laid through its centre. By the beginning of the 20th century, much of the area was residential. Some of the non-residential developments, such as the department stores and theatres on Holloway Road and the churches and chapels, increased the amenities available to the residents:  by the beginning of the 20th century Holloway Road was the premier shopping destination for the whole of North London. Other developments were less desirable: in the 1850s Holloway Prison was established in the centre of the area and London’s busy livestock market was moved from Smithfield to Copenhagen Fields, the site of the demolished Copenhagen House.

Major redevelopment was undertaken by the London County Council in the early 20th century and redevelopment continued under Islington council after the Second World War, one of the most notable changes being the transformation of the livestock market into a local museum (incorporating the market’s famous clocktower), a large new green space (Caledonian Park) and attractive housing. Holloway Prison was also closed – although the site awaits redevelopment.

Paradise Row, Liverpool Road – an attractive terrace of houses dating from the 1760s.  One of the early occupants was a Huguenot artist, Paul Paillau whose drawings of birds illustrated one of the earliest British works of natural history: British Zoology by Thomas Pennant, published in 1776.

St Mary Magdalene, Holloway Road – built in 1814 as a “chapel of ease” for St. Mary Islington which was running out of space, with an interior designed by William Wickens and an exterior that was, at the time, described as looking like “a cow getting up.” Huge and interesting churchyard with a very fine London Plane tree in the western section – recorded as the oldest in Islington – and some fine table-top tombs, some possibly with Huguenot connections.

The Rock Tower – an unusual building on the corner of Tufnell Park Road and Carleton Road that was built as the second of three Anglican churches called ‘St George’s Tufnell Park’. With a design inspired by a 5th century Greek church, it has had a colourful history – including as a Shakespearean theatre. (The third, and current, St George’s, an attractive modern church, is a few steps down Carleton Road.)

Islington Arts Factory – the former Camden Road New Church and Sunday School (built by the followers of Emanuel Swendenborg) is now a performance and rehearsal space. It is immediately recognisable because it has lost the top of its spire – as the result of nothing more dramatic than corrosion.

Paradise Park – on 26 December 1944, local residents were celebrating Boxing Day in a local pub when a V2 missile hit without warning, destroying the pub and a large part of the surrounding area. This attractive park was built as a memorial and the entrance in Mackenzie Road has an illustrated plaque telling the sad story.

Caledonian Estate– – an impressive estate built by the London County Council in the early years of the 20th century which was designed by James Greenwood Stephenson during his time in the Housing of the Working Classes Branch of the LCC’s Architect’s Department.  The Caledonian Estate was built on the site vacated by the Caledonian Asylum, the residential school for the children of Scottish servicemen that gave its name to Caledonian Road, and it retains the Scottish connection by naming its blocks after famous Scots.

Caledonian Park – a park built on the site of the old livestock market (the Metropolitan Meat Market) and the earlier Copenhagen Fields. It is surrounded by the market’s original railings (less their ornamental bulls’ heads). Three of the four corner inns that were built to provide refreshment to market traders and visitors also survive, although converted to other purposes – one in Market Road and two in North Road.

Caledonian Park Clocktower – the clocktower that stood in the centre of the livestock market. It still retains its original clock and those with the stamina to climb to the top can view the mechanism as well as appreciating a spectacular view of London. A charming visitors’ centre provides information on the market and occasional exhibitions.

Holloway Prison site – the 1852 prison (famously resembling a mediaeval castle) became a female-only prison in 1903, just in time to become notorious for housing some of the most notable Suffragettes, including Emmeline Pankhurst, Emily Davison and Constance Markievicz. Rebuilt in 1977 (losing all trace of the Middle Ages), the prison closed in 2016. No final decision has been taken as to the redevelopment of the site.

Holloway Road – the central section was once a major shopping centre with 5 large department stores and several theatres. Only one of the stores (Selby’s) remains but the road hosts most of today’s standard high-street stores and some trace of its former grandeur can be glimpsed in the buildings mentioned below.

Islington War Memorial, former Royal Northern Hospital – Islington’s fitting memorial to those who fell in the First World War was to build a casualty department in the Royal Northern Hospital. The building has been converted into flats but an arch in Manor Gardens lists the names of the fallen. (On the other side of Manor Road is Islington’s first branch library, opened in 1906.)

Odeon Luxe – built on a gigantic scale, with Italian Renaissance interiors, a Wurlitzer organ, a large restaurant, and seating for 3,006 people, the building opened as the Gaumont Theatre in 1938 but was hit by a V1 missile during World War Two and only reopened in 1958. It now hosts 7 screens and has a total seating capacity of 495.

Dr Crippen – Doctor Hawley Harvey Crippen murdered his wife, a music hall artiste, at 39 Hilldrop Crescent in Holloway in 1910. Arrested while fleeing to America, he was subsequently convicted at the Old Bailey and executed at Pentonville Prison and 39 Hilldrop Crescent was turned first into a ghoulish museum and then (inappropriately given the late Mrs Crippen’s occupation) into a lodging house for music hall artistes, before the Council stepped in and comprehensively redeveloped the area.

Ruth Ellis was hanged at Holloway prison 13th July 1955 for the fatal shooting of her lover David Blakely: although Blakely had often beaten her and taunted her with his affairs, she was portrayed in court as the one who had had affairs and who had then carried out the murder in a cold and calculating manner. After her death public opinion on such matters started to change and her execution played a major part in the movement to abolish the death penalty – although it took another decade for the law to be changed.

Bob Hoskins, the award-winning actor of “The Long Good Friday” and “Mona Lisa,” lived on Penn Road. Concerned with the loss of local amenities, he campaigned to save Jones Brothers, the well-known department store on Holloway Road from closure in 1990.

Joe Meek was an innovative record producer who was famous for using experimental analogue techniques such as overdubbing and reverb long before the development of multi-track and digital production methods. Brilliantly inventive, he turned out several hits from his flat in Holloway Rd: his most famous release was Telstar by The Tornados which came out in 1962 – but he turned down offers to produce the Beatles no less than 4 times!

Charles Pooter of The Laurels, Brickfield Terrace, Holloway is the purported author of a diary, published in book form as The Diary of a Nobody in 1892. He is a fictional character – the true authors of the Diary were two brothers, George and Weedon Grossmith – but ‘his’ diary gives an amusing and affectionate portrait of middle-class life in Holloway at the end of the 19th century.

Tolpuddle Martyrs petition – In 1834 six agricultural labourers from Tolpuddle in Dorset (who quickly became known as ‘the Tolpuddle Martyrs’) were sentenced to 7 years’ transportation to Australia for forming a trade union. On 21st April 1834 a large crowd – claimed to have numbered 100,000 – met on Copenhagen Fields (now Caledonian Park) and marched in procession to Parliament with a petition demanding that the Martyrs be pardoned. The petition did not achieve its immediate aim – the six men were still transported – but their sentences were later commuted and all six returned to the UK within 2 or 3 years.

Suffragette imprisonments and protests – Holloway prison was key to the suffragette story. Hunger strikes by the ‘Hollowayettes’, as the suffragette prisoners became known, and the authorities’ response of force feeding, raised the profile of the suffragette cause, highlighted the strength of feeling may women had about the right to vote, and gained public support both for the cause and for better treatment of women in prison, although not before many had suffered terribly. The prison gates were regular scenes of protest in the early 1900s but it was not until the outbreak of war in 1914 that the government ordered the release of all suffragettes from prison and the militant campaign for the women’s vote effectively came to an end.

Entertainment – From the 1930’s until the 1970’s, Holloway Road was a centre of entertainment with four large cinemas – The Marlborough, The Savoy, The Essoldo (re-opened by the American actor, Alan Ladd, in 1955, generating huge public interest) and The Gaumont.  Only the Gaumont now remains as a cinema (see Odeon Luxe above). As to theatre, the HQ of the National Youth Theatre is on Holloway Road, and from 1976-1989, St. George’s Theatre was on Tufnell Park Road in a round converted church (see The Rock Tower above): the brainchild of the actor, George Murcell, it mainly produced Shakespeare’s plays but had good jazz sessions on Sundays.

Flea market – Side by side with the livestock market, Caledonian Park hosted the most popular and largest of London’s flea markets in the 1920’s and 1930’s.  Famous visitors, searching for bargains, included Queen Mary, the German playwright Bertholt Brecht, and the actress Greta Garbo.