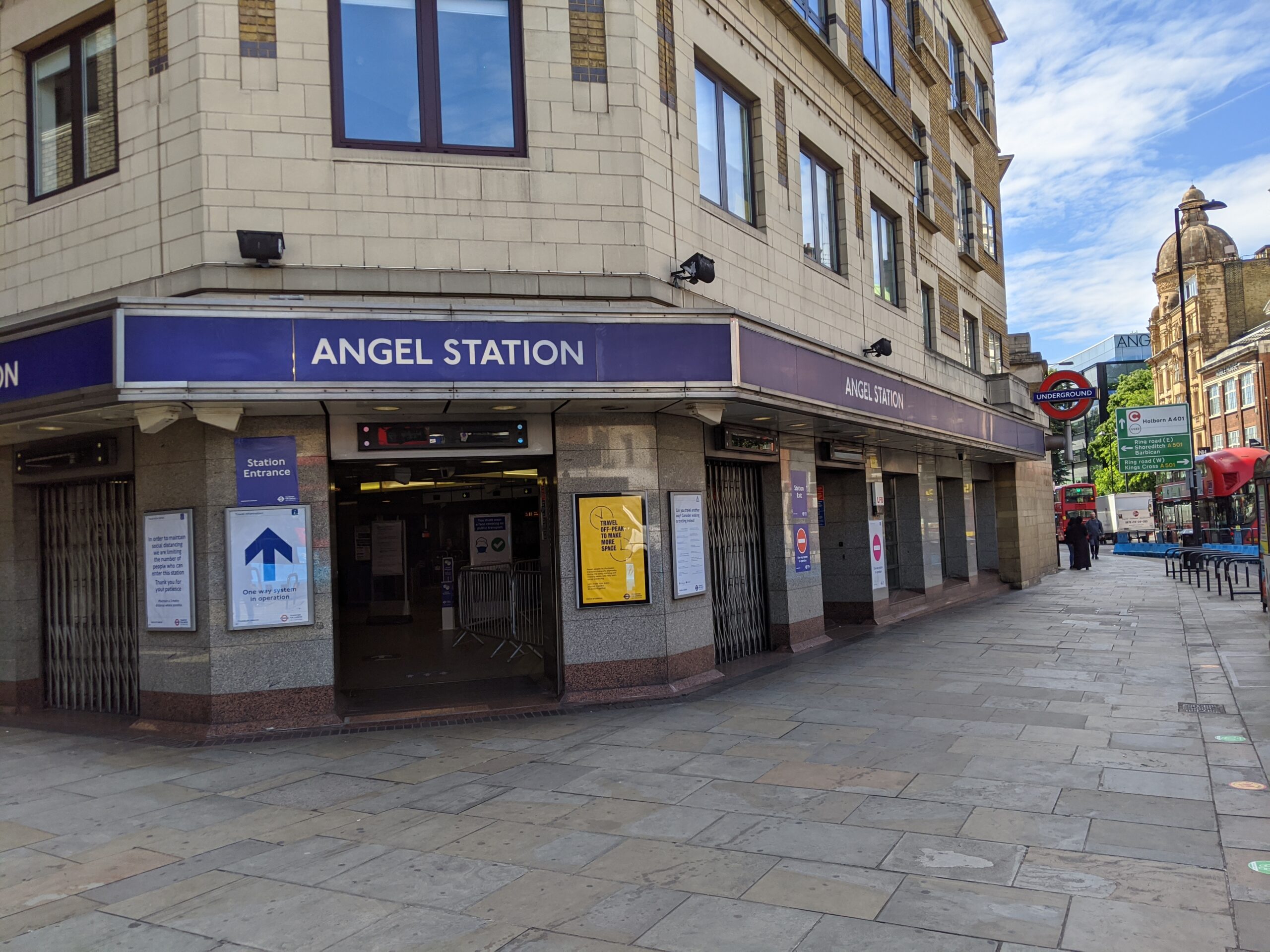 In our second Blog we are going to the tube station at the other end of Central Islington, Angel station.

One of Angel’s claims to fame is being one of the light blue properties on the Monopoly board sharing the colour with Pentonville Road, also in Islington, and Euston Road.

The station is named after the Angel Inn built in the 1600’s which became a coaching inn and a local landmark in the C19.  It gets a mention in Charles Dicken’ novel Oliver Twist.

The station was originally built for the City & South London Railway and opened in 1901 as part of a new extension from Moorgate.  The original station building, which can still be seen if you turn left out of the station and walk around the corner to Torrens Street, was designed by the architect Sydney Smith.  It started as a terminus station at the end of the line but in 1907 a further extension was opened from Angel to Euston.

Perhaps not expecting the huge crowds that would use the station, it was originally built with a single central island separating the two tracks running in a single tunnel.  Access to the platforms was via lifts.  The station platform was often overcrowded and a real safety risk, so the station was rebuilt in the early 1990’s.

A new tunnel was created for the north bound line platform and the south bound now occupies the entire width of the original 30ft tunnel.  Next time you are on the south bound platform you can clearly see the original tunnel exits.   At the same time a new station entrance was built, around the corner from the old one, in Islington High Street and this opened in 1992.

It has the longest escalator on the Underground and the second longest in the UK (after one at Heathrow’s Terminal 5).  Probably this was the reason why Angel was chosen by a Norwegian skier as his own personal ski run.  Achieving a speed of around 30 mph he wore a helmet mounted camera and his escapade video went viral on YouTube.  As London Underground stated at the time, “this is a dangerous, stupid and irresponsible act”.  Quite right.

In the station ticket hall is this 6 ft sculpture of an Angel by Kevin Boys Blacksmiths, a family firm located opposite Canary Wharf.  If you took the opportunity of visiting Superbloom in the Tower of London’s moat, you might have noticed some archers perched on the Tower walls overlook the moat.  These too are by Kevin Boys.

To celebrate 150 years of the tube, artist Mark Wallinger was commissioned to design an artwork for each of the Underground’s 270 stations.  Each station has its own unique circular labyrinth in black and white with red graphics produced in vitreous enamel, the material used for signs throughout London Underground.  The labyrinths also reflect the tube’s roundel logo.  Angel’s is numbered 206/270 and can be found in the ticket hall.  At each entrance to a labyrinth is a red X and the tactile feel of the artwork encourages one to trace a path into the centre and out of the labyrinth.  Something to do whilst waiting for your tube.